LCA is a comprehensive method for estimating and analyzing the environmental impacts of products and services ‘from cradle to grave.’  In the case of orchard production, the analysis is from ‘nursery to farm-gate’ – including manufacturing and shipping of agrochemicals, fuels, materials, and equipment, as well as air emissions from the combustion of fuels and field emissions. For some crops this study also extends beyond the farm gate to include post-harvest and processing operations.

A standard LCA framework consists of the following distinct steps:

1) Goal and scope definition, which includes defining the system boundary and functional unit of analysis

2) Life cycle inventory (LCI), which includes identification and quantification of all inputs at each stage of the life cycle included within the system boundary

The goal of this project was to conduct process-based LCAs for typical commercial production of five orchard crops – almond, walnut, peach, prune, and pistachio – in California, in order to identify operations and inputs that contribute the most to total emissions and energy use. This study also estimated the potential effects of carbon sequestration in biomass and soil, including credits to the orchard production system for offsetting emissions from fossil fuel-based electricity production by generating biomass for electric power generation.

There are two units of analysis for this study: one kilogram of orchard product, and one acre of representative orchard. The results for both units of analysis take into account the typical productive lifespan of that orchard type. The lifespan is divided into distinct stages that reflect different input demand and growth for each of the five crops. Emissions and energy use impacts are averaged across all the years of the total lifespan, to arrive at a quantification of average annual impacts of a kilogram of product.

Major differences among the five orchard system types are in agrochemical and water input requirements, fuel use in field operations, typical yield per acre, planting density and biomass accumulation, orchard lifetime and length of time before full bearing, and geospatial distribution and spatial relationships with irrigation infrastructure. 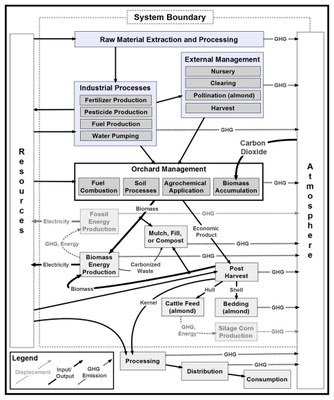 Processes and environmental flows quantified over the productive lifespan of a typical orchard for the five crops include nursery production of saplings; orchard establishment; field operations; production and transport of chemical and material inputs to the orchard; pollination services; N2O field emissions; and transport and utilization of co-products.

UC Davis Cost and Return Studies were used as the basis for the orchard LCA model. These document annual crop production costs for various California crops by inventorying typical inputs and practices on a regional basis up to the farm gate. The studies are based on data collected from growers, orchard managers, and UC Cooperative Extension Farm Advisors through surveys, interviews, and focus groups. In this study, the most conservative available regional data from the studies is used – referring to the highest typical input values, to reduce the risk of underestimating inputs. Cost and Return Studies data was verified with individual growers, commodity groups, and other industry experts.

Life Cycle Inventory (LCI) data quantifying energy inputs, material inputs, and emissions for a variety of materials used throughout the orchard crop production cycle were used in the model. Several original LCIs were created for the model, including the following: 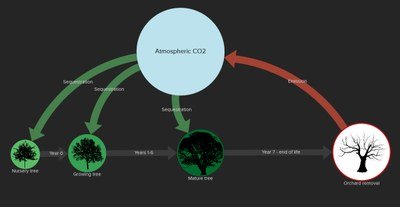 Several different gases with different heat trapping capacities contribute to global climate change.  In order to better communicate and understand the combined effect of the emissions of diverse gases, scientists typically express their impacts in terms of a standardized Global Warming Potential (GWP), quantified as CO2-equivalents, which is a measure of the total energy that a gas absorbs over a particular time period, relative to carbon dioxide, so that the GWPs of multiple gases can be added together. One hundred years has become the standard time period, to account for long-term climate change. GWP only estimates heat trapping capacity and does not account for when during the 100-year timeframe a gas was actually emitted to the atmosphere or removed from it. In practice, this means that GWPs are applied to the sum of GHG emissions over the life cycle of a product, and GHG removals from the atmosphere of less than 100 years are treated as if they never occurred. In other words, the fact that a tree, such as an almond tree, removes carbon dioxide from the atmosphere over its 25-year lifespan, is not accounted for using the traditional GWP approach, because the tree will be removed and either burned or chipped, and its stored carbon released back to the atmosphere within less than 100 years.

This study of orchard systems reports emissions and credits both in terms of the traditional GWP, but also with an alternative calculation, known as the Time Adjusted Warming Potential (TAWP). Unlike GWP, TAWP accounts for when a GHG emission to or removal from the atmosphere occurs and can therefore estimate the benefits of temporary storage of CO2 in tree biomass, which reduces the overall cumulative warming over time.  TAWP calculates the equivalent amount of CO2 emitted today that would result in that reduced amount of warming. This is analogous to estimating the net present value for monetary flows over time, answering the question of what the equivalent value is today for some future monetary flows. Using this approach, orchard trees that store carbon over a 25-year lifespan reduce the CO2-equivalent emissions of the orchard by temporarily removing CO2 from the atmosphere.

Agriculture Resources and the Environment Energy and Climate Footprinting