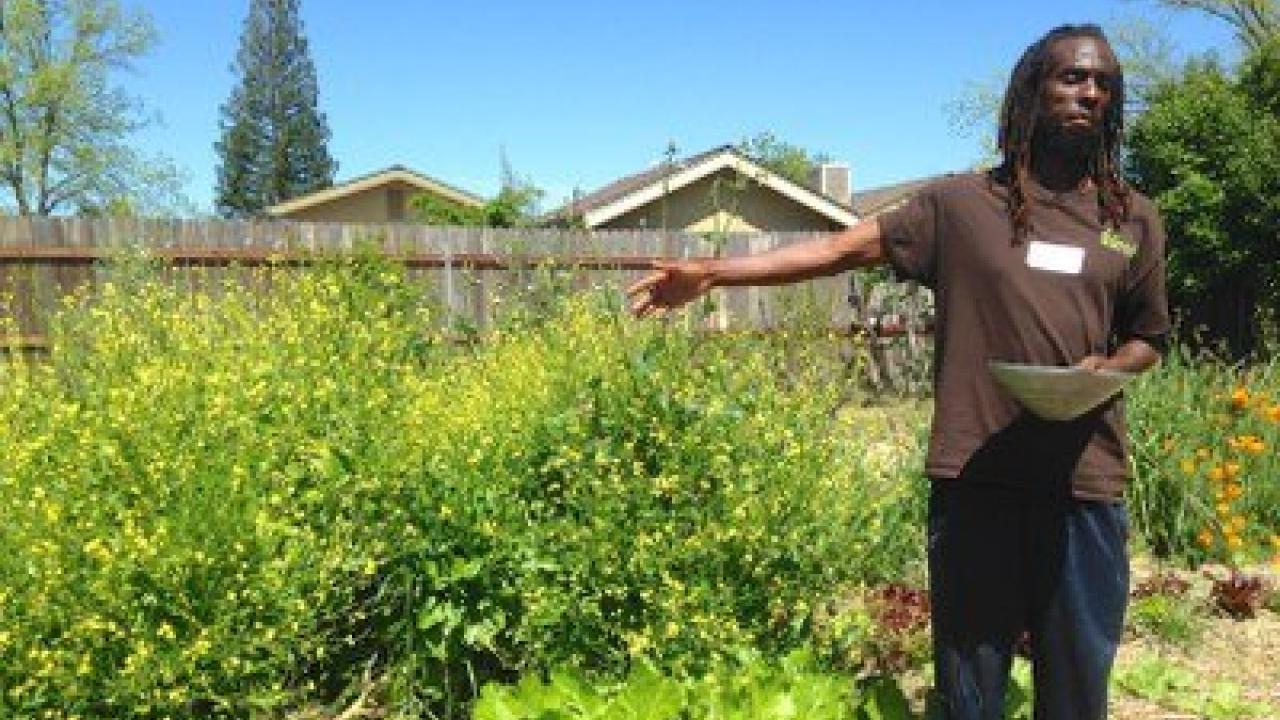 At the Yisrael Family Urban Farm, located on a double lot in the Oak Park neighborhood of Sacramento, farmer Chanowk Yisrael talked with a group of twenty farmers, gardeners, and educators about his ten-year path from information technology professional to urban farmer and community educator. We toured the farm, now laid out with commercial-style vegetable rows and dwarf fruit trees of multiple varieties, met the flock of chickens, and learned about soil building and weed control methods that save farmers time and energy. Then Chanowk showed off his perfect rich soil (the product of ten years of careful attention) with a double-digging demonstration and led the group on a visit to the NRCS-funded high tunnel hoop-house used for giving seedlings an early start in cold winter months.

In Sacramento, as in cities all over California, new farmers are transforming empty lots and backyards into working farms, growing fruits and vegetables to sell or distribute locally. Urban farms are often very small scale, commercially marginal, and operated by beginning farmers. They can be operated by individuals, families, non-profit organizations, schools or colleges, or by other groups. Research shows that successful urban farms can bring social, health, environmental, and economic benefits to local communities, including improved access to healthful food. A number of cities in California, including San Francisco, Los Angeles, Sacramento, and San Diego have recently updated municipal policies to facilitate urban agriculture, due to strong community interest.

Despite the benefits associated with urban agriculture, there are many challenges. Urban farmers routinely face issues related to zoning, soil, water access, and profitability, as a few examples. A team of UC Cooperative Extension farm advisors, specialists and others, including UC SAREP, are working with local partners in four California urban regions, offering a series of workshops to help urban farmers address some of these challenges. The workshop at the Yisrael Farm was the third of a four workshop series held in Sacramento; similar workshop series have been offered in Los Angeles, the San Francisco Bay Area, and San Diego.

The second workshop covered the legal basics of urban farming, including types of urban farm enterprises, zoning issues, soil testing, and required permits and licenses. Participants were introduced to key local resources including the Agricultural Commissioner, the county Environmental Health Department and a leader from the Sacramento Food Policy Council, a local group involved in advocating for city and county policy changes allowing urban farm stands and tax incentives for landowners who lease land to urban farmers. The panel discussion at the “Legal Basics for Urban Farms” workshop gave everyone a chance to ask questions of all the speakers

The series of urban agriculture workshops has, hopefully, helped build stronger collaborations among the regions’ urban farmers as well as between UC and the community organizations we worked with as partners. The UC ANR team will learn from the project participants’ evaluations and feedback, and will continue to work with local urban farmers and their organizations to support everyone growing and distributing food from California’s urban farms.

Presentations and handouts from the workshop series’ are available at ucanr.edu/sites/UrbanAg/Urban_Ag_Workshops/

California elderberries have rich benefits for farms and diets