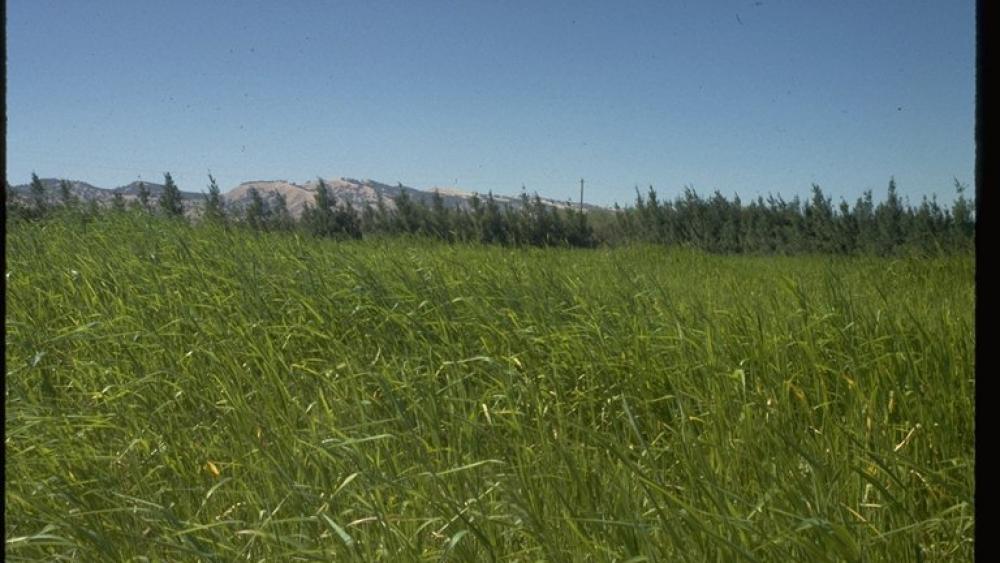 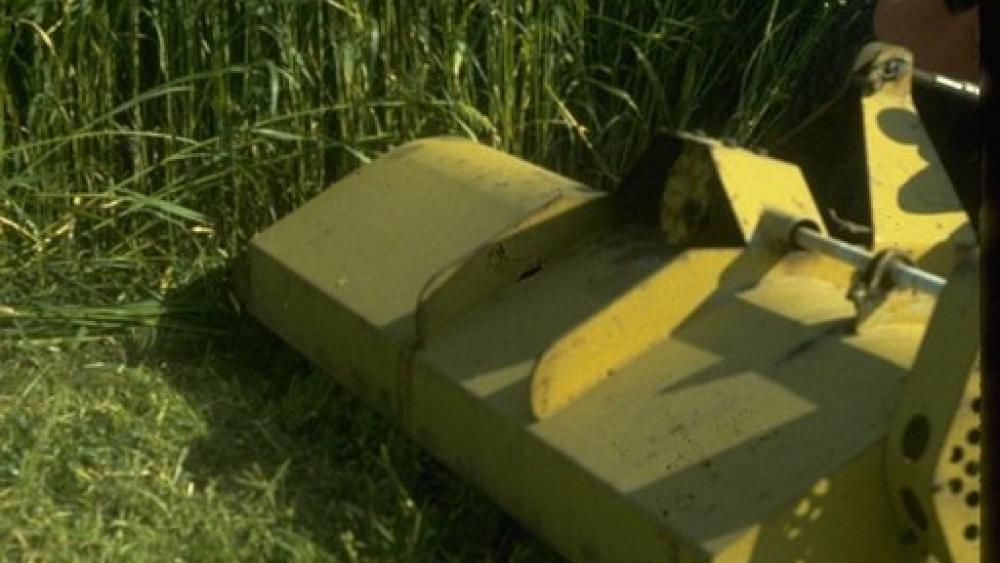 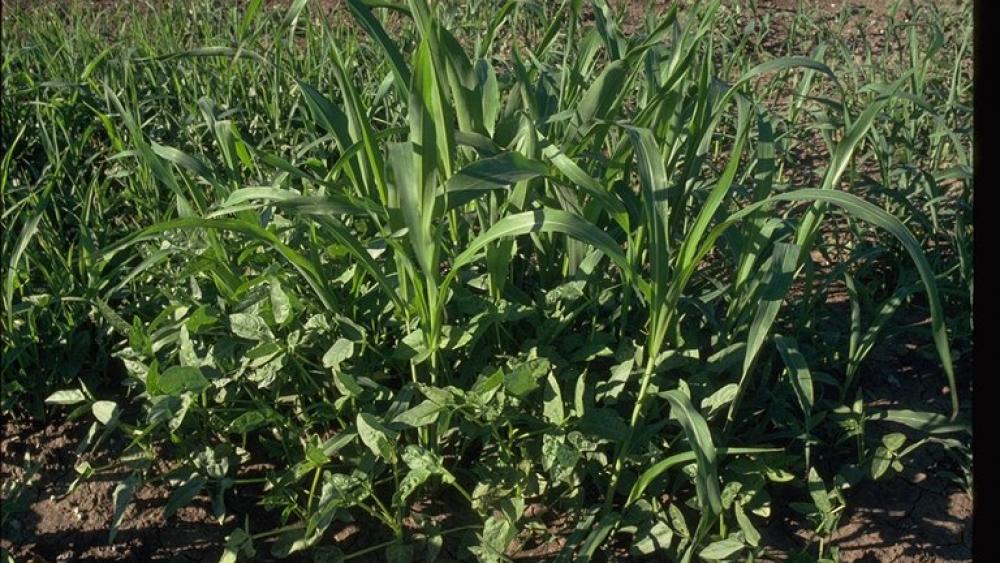 Cowpea may be grown in combination with sorghum-sudan grass hybrids and other warm-season cover crops. Davis, Yolo Co., CA, photo by Bob Bugg. 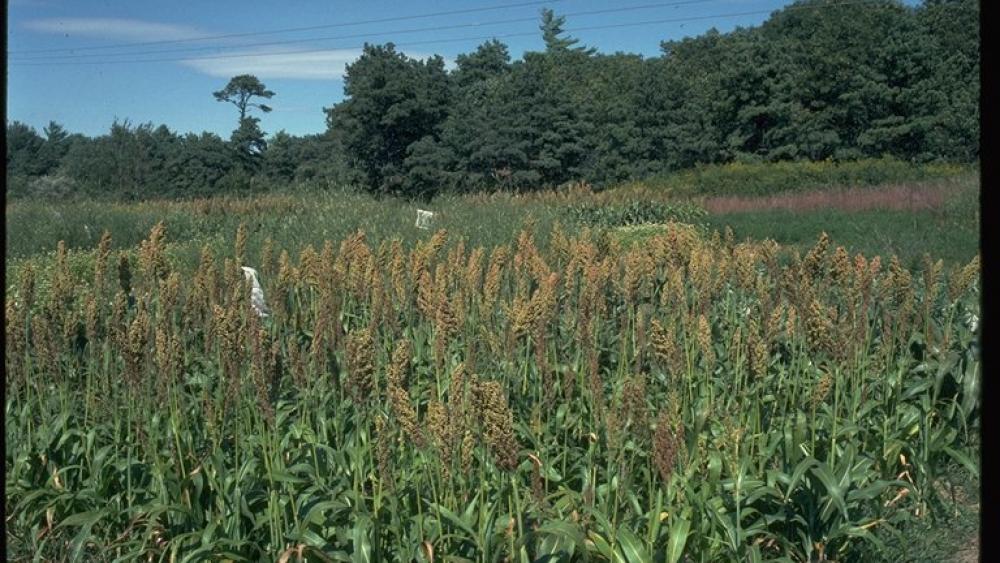 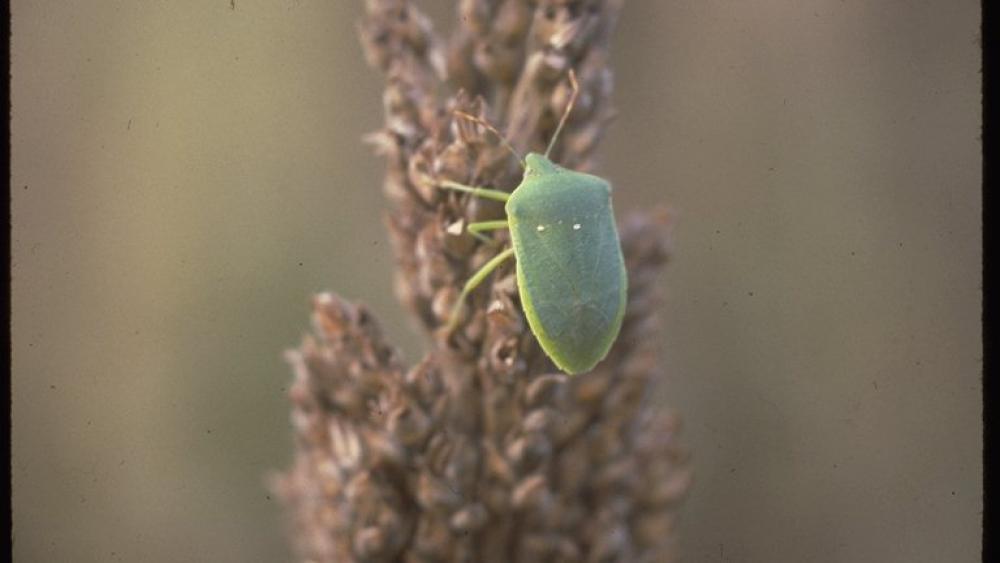 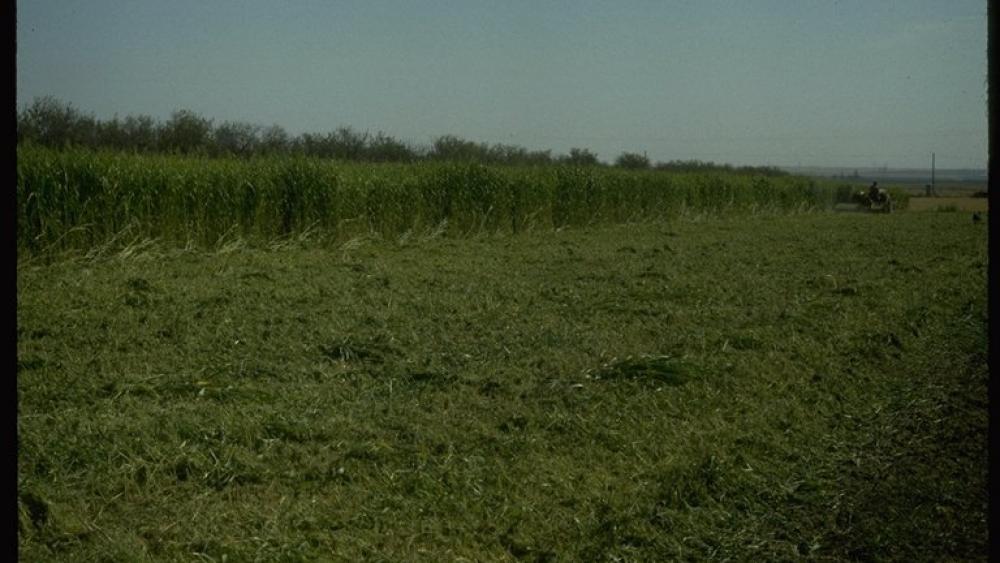 Sudangrass is a drought-tolerant, fast growing, warm-season grass that can serve as a cover crop. Capay, Yolo Co., CA, photo by Ann Main. 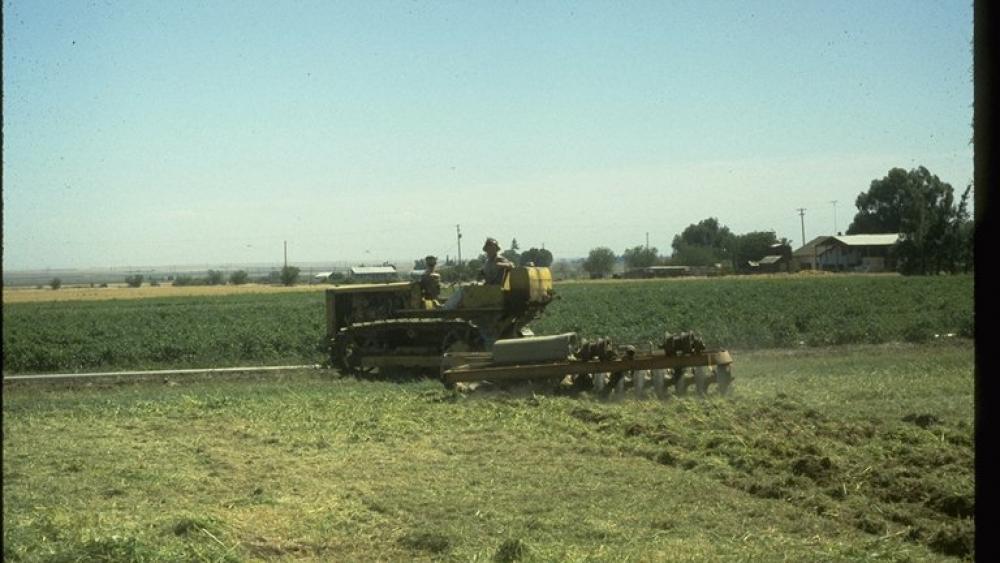 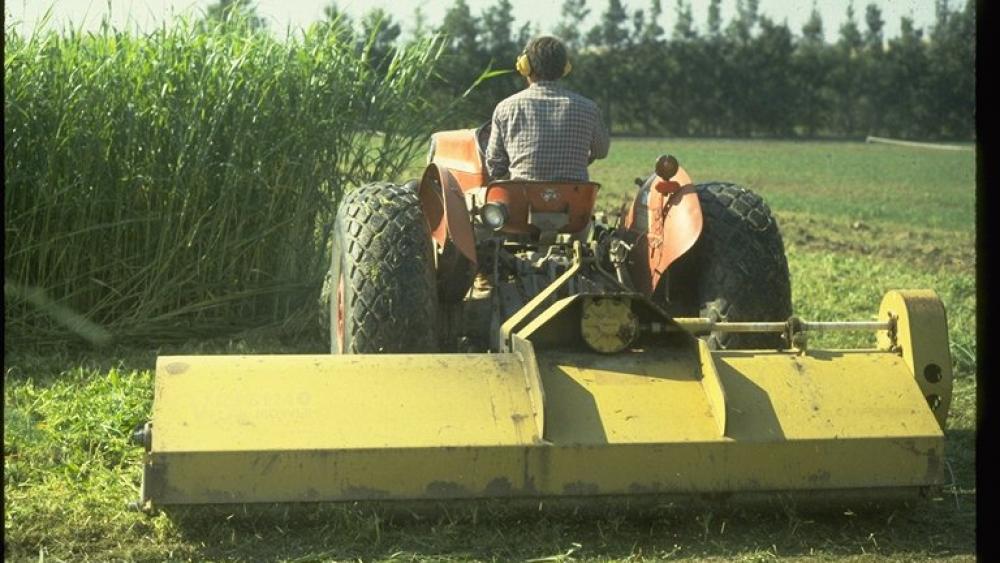 Sudangrass is a warm-season annual grass that is often used as a cover crop in organic vegetable rotations. Capay, Yolo Co., CA, photo by Ann Main. 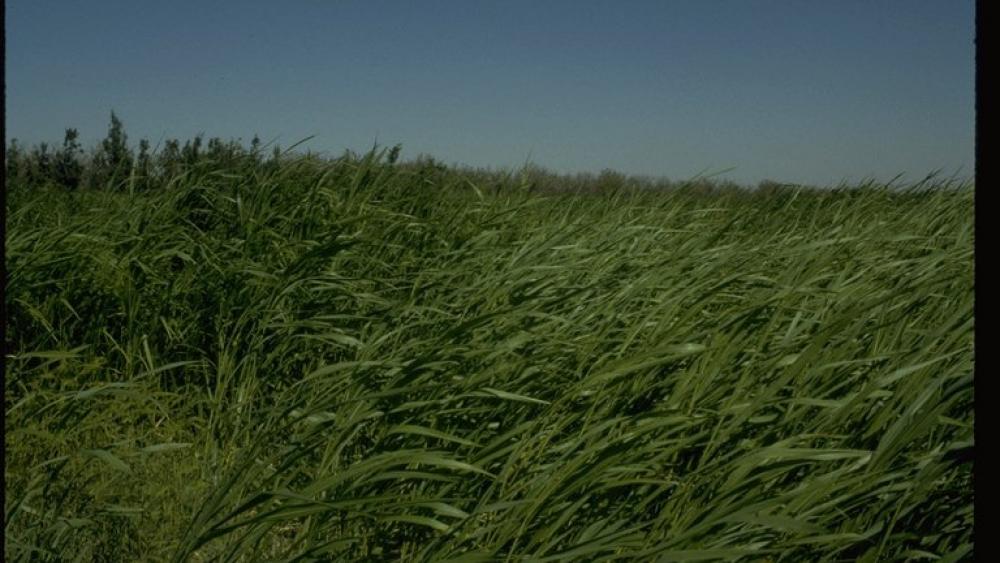 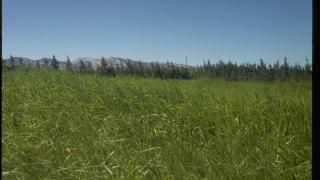 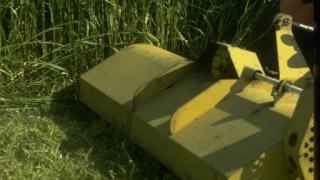 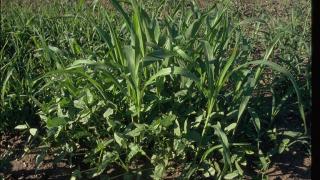 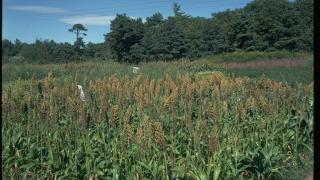 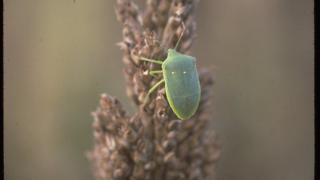 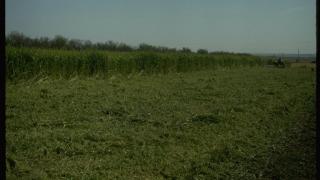 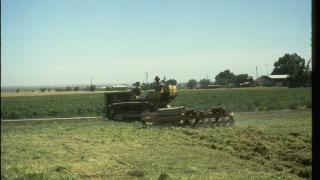 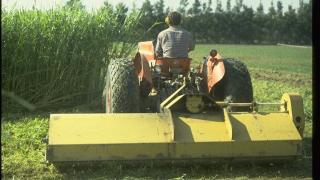 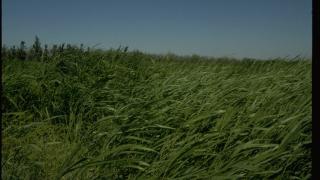 The common name is sorghum, Sudangrass, or Sudan grass (Marks and Townsend, 1973).

According to the Southern Seedsmen's Association (1992), there are sorghum varieties used for forage, grain, syrup, and wild game feed.

The chief races or varieties of sorghum in the United States are termed sorgo, kafir, durra, milo, feterita, shallu, kaoliang, and broomcorn (Hitchcock, 1971).

No information is available in this database on this topic.

According to Fribourg (1985), sorghum is a coarse, erect grass with variable growth characteristics, and height ranging from 0.45 to over 5 m. Some cultivars tiller early, whereas others do not until maturity or when the plant is damaged. The inflorescence is a panicle containing up to 6,000 fertile spikelets. The plant is usually self pollinated.

Several races of sorghum were introduced from Africa (Hitchcock, 1971).

Sorghums can grow where precipitation is as low as 400-650 mm, but do better with more water; drought may induce temporary dormancy.

Seed in spring after the last threat of frost (R.L. Bugg, pers. comm.). Seed when soil temperature reaches 60 F or more, usually May 1. Earlier seedings will be overtaken by weeds if the weather is cool. (Fred Thomas, pers. comm.)

These are grasses and generally require no inoculation.

As with most grasses, these have fibrous root systems (Bugg, pers. comm.).

Kutschera (1960) reported that Sorghum halepense generally roots to a depth of 124 cm.

Can easily be planted to moisture with no subsequent water for 2-3 weeks. (Mark Van Horn, pers. comm.)

De Queiroz and Galwey (1987) grew five sorghum (S1006, 2219 B, CSH 5, CSH 6, and Ethiopian landrace E 35-1) and 2 cowpea varieties (the semi-erect C 152 and the spreading, later-maturing GFC 4) as sole crops and in sorghum-cowpea bicultures during the dry season. There was no significant effect of cowpea variety on sorghum yield, nor of sorghum variety on cowpea. This will probably not be the case for rainy-season plantings, in which sorghum tends to shade the intercrop more completely. For dry-season plantings, the authors suggested that a single cowpea variety might be used to evaluate sorghum performance in biculture.

Sorghum produces a large volumes of biomass in 2-3 months (Johnny's Selected Seeds, 1983). Sorghum-sudangrass hybrids produce more biomass than does sudangrass (Schonbeck, 1988). When sorghums are cut for hay, each of 5 harvests can yield 2 Mg/ha or more. Total dry matter production by sorghum or pearl millet can range from 15-20 Mg/ha (Fribourg, 1985).

Relative humidity will be high in a well-irrigated sudangrass field when it is 6 feet tall. (Mark Van Horn, pers. comm.)

Sudangrass and sorghum-sudangrass hybrids are fast-growing summer annuals that can be used to suppress weeds or provide mulch or soil structural improvement (Schonbeck, 1988).

Zhang and Hendrix (1995) in Georgia conducted laboratory microcosm studies on carbon flow as affected by the epigeic earthworm Lumbricus rubellus and the endogeic earthworm Aporrectodea caliginosa vs. microcosms lacking earthworms. Sorghum leaf litter was labeled with 13C, whereas cereal rye fine roots and root exudates were labeled with 14C. the sorghum leaves were placed on the microcosm soil surfaces; cereal rye portions were included in the soil. Mason jars containing 500g of the 14C-labeled soil served as microcosms. There were three treatments, each replicated 5 times: (1) 14C soil and 13C litter; (2) 14C soil and 13C litter and 4 adult L. rubellus; and (3) 14C soil and 13C litter and 4 adult A. caliginosa. After 37 days of incubation at 18° C, destructive sampling terminated the experiment. Key findings included: (1) Earthworms decreased translocation of soil C into leaf litter, possibly by reducing fungal hyphal connections; (2) the epigeic earthworm (L. rubellus) preferentially ingested 13C litter, whereas the endogeic A. caliginosa fed preferentially on the 14C-labeled soil. The former increased surface litter loss by ~15% and the latter by ~11% vis a vis the control microcosms.

Sorghums produce high volumes of high quality forage during the warm-season (Fribourg, 1985). Sudangrass and sorghum-sudangrass hybrids produce toxic levels of cyanide while young, so should only be grazed when more mature (Schonbeck, 1988).

There is substantial documentation regarding prussic acid poisoning to livestock with new growth or frosted sudan or sorghum x sudan. This is the one major problem in some livestock situations. (Fred Thomas, pers. comm.)

Sudangrass and sorghum-sudangrass hybrids are fast-growing summer annuals that can be used to suppress weeds or provide mulch or soil structural improvement (Schonbeck, 1988).