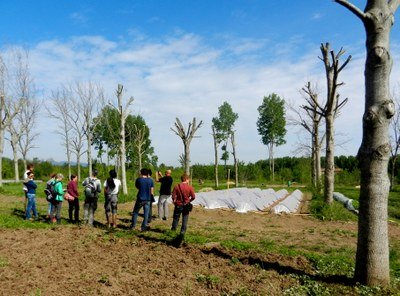 Denis Flores and his wife are small-scale, direct market and U-pick organic vegetable and fruit farmers in southern France who have embarked on a grand experiment—growing vegetables under rows of tall timber trees. The Flores' call their experiment "arbre ratatouille”, or tree ratatouille, after the popular French mixed vegetable stew.

When Flores and his wife were looking to relocate their vegetable operation three years ago, he found this 24-acre piece of land for sale at less than half the price of comparable farmland in the area. Why was it so cheap when it was filled with high-value timber trees such as walnut, cherry, and poplar? Flores noted that the presence of the trees was viewed as a liability by most farmers and that the cost of removal— stumps and all—was factored into the reduced price of the land.

Flores, however, gamely purchased the land and now declares that “it’s a paradise!” Working under shade and colorful blooms of the trees makes for a much more pleasant farming experience, especially in intensive, small-scale vegetable production, which requires a lot of hand labor and which also has customers coming right onto the farm to pick their own produce.

But do the vegetable crops consider it a paradise? Flores points to young lettuce plants growing close to the large trees within the tree row, which are visibly larger and greener than their brethren planted between the rows further from the trees, even though they’ve all been managed the same way.

Why are the plants growing closer to the trees more vigorous? Is it due to differences in soil moisture due to the action of tree roots? What about organic matter levels in the soil? Or the role of greater shade? These questions are the subject of ongoing research on the farm being carried out by researchers and university students at the French National Institute for Agricultural Research (INRA).

While those studies are still underway, it is already evident that there are several ways in which the farm benefits from the presence of the trees. Flores chips the prunings from the trees and uses the chips as mulch on his vegetable beds to help control weeds and retain soil moisture. As is the case for many organic vegetable producers, Flores considers weed control to be one of his biggest production challenges. Although he still uses hand labor, soil solarization, and shallow tillage to address weed issues throughout the farm, he also noted that a three-year old strawberry bed covered with wood chips from the trees had a lower weed incidence compared to his prior experiences without wood chips.

As these wood chips break down over the years, they’ll provide some nutrients and lots of organic matter to the soil, improving soil health. In fact, the soil on Flores’ farm contains a whopping 300 earthworms per square meter, compared to almost zero earthworms in the soil of the conventionally-managed vineyard that sits right next door. Producing the wood chips on site also reduces the need to purchase and transport soil amendments from outside the farm, although it does require access to chipping equipment.

Other benefits from the trees include sun protection for the strawberry plants during the hot summer months. The shady micro-climate is also very suitable for mushroom production, which happens on the standing stumps of previously cut trees, allowing for product diversification on the farm. Finally, the trees themselves can act as a cash bank, with Flores having recently cut one Paulownia tree to sell to a specialty surf board maker for about 1000 euros.

One challenge in farming with trees is to find vegetable varieties that perform well in the partial shade. Flores uses non-hybrid, open-pollinated lettuce varieties and saves his own seed from year to year to select for the best-performing genotypes (a reflection of the lack of optimal varieties developed for the different growing conditions in agroforestry systems). But even with this challenge, Flores is enthusiastic about continuing his grand experiment.